¿Qué tal, y’all? This month, we’re taking a closer look at the Spanish influence on Creole cuisine in Langlois’ Cajun/Creole dinner series, and we’re putting the late-summer crops from Crossroads Farm to good use on this menu. We’re also incorporating some fun kitchen toys, er, tools for this menu. Think: molecular gastronomy, Louisiana style. Here’s how it’s all shaking down:

For the first course, we’re serving a classic, pureed, silky-smooth, chilled corn soup that highlights the natural sweetness of corn at this time of year. We add a little fresh cream and a squeeze of lemon juice to brighten it up, and it’s scented with a swizzle of fresh thyme from the herb garden and a drizzle of roasted garlic oil. We’re adding some drama to this dish by topping it with fresh popcorn that’s doused with liquid nitrogen. Dropped into the soup, it has a smoky, dragon’s breath effect.

During this course, we talk about corn and colonial American history, as well as the use of corn in Creole and Cajun foods (think: cornbread and Macque Choux, the late-summer corn/tomato/onion/okra stew). Side note: if you’re looking for things to do around Louisiana in June, the Corn Festival in Bunkie is a hoot. It’s everything you love about a small-town food festival, and the Bunkie Chamber of Commerce’s annual cookbook is a must.

Brace yourself for the second course: it’s a hearty meat and potatoes dish, but we lighten it up with bright, fresh, zippy sauces. We hand-cut dry-aged New York strip steaks, hit them with a light Creole spice mix, and cold-smoke the steaks over local pecan and oak wood.

The steak is served with a recipe and technique I’m in love with: Canary Island-style salt-crusted potatoes (papas arrugadas). The backstory is as fascinating as the technique, which Chef Tess picked up from Top Chef winner Marcel Vigneron during Tales of the Cocktail 2012.

The Canary Islands, a Spanish archipelago off the northwest coast of Africa, were a first and last stop for Spanish galleons coming and going across the Atlantic to the Americas. The native cuisine is marked by Spanish and North African influences, but the salt-crusting technique is authentically Canarios: small potatoes are boiled in salty seawater, which produces a wrinkly, salt-infused potato skin. (We don’t use seawater, but the results are pretty much the same.) The potatoes are traditionally served with a punchy, green mojo sauce, and we’re also serving this dish with a charred red pepper romesco (a sauce native to the Catalan region in Spain). Both sauces balance the saltiness of the potatoes and pair well with the cold-smoked steak. The dish is finished with charred green onions (called calcot) and crisp purple potato chips.

Our Spanish theme carries through to the dessert course, a sorbet variation on sangria. We opted to use a lighter white wine, our house Pinto Grigio (versus the traditional sangria red), and it’s sweetened with sugar and spiced with cinnamon, cardamom, black pepper and vanilla. We blend perfect, ripe, Ruston peaches or, when available, fresh cantaloupe picked from the Crossroads Farm with the wine syrup and freeze it. The sorbet is served with a sauce made from Crossroads Farm berries, including mulberries, blackberries, and blueberries.

Made with Ruston peaches, Crossroads Farm berry sauce, and a candied orange tuile

Hungry yet? Hope to see you in August — the a/c is cranking, the wine is chilled, and we’re having a blast in the kitchen. 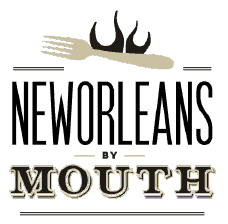 "Quite possibly the best evening I've had in 17 years of coming to NOLA.
Energetic, frolicksome and amazingly informative the evening flew by so fast that I have to return just to see what I might have missed.Cannot recommend Langlois enough. It would make a great Christmas gift!"
"It's apparent that Chef Amy is doing what she loves.
She has the perfect personality to keep everyone (from young to old, to the not-so-knowledgeable to the experienced cook) interested from start to finish. "
"We loved the staff & the experience. Such a great cookbook by Chef Amy!!!!!
I bought it and sat at the Hotel Monteleone poolside reading the whole book! Gives me as a northerner such a different view if what Katrina did to our favorite place to visit!"
"This hands-on class taught me more than a year's worth of watching the Food Network.
Great fun, great food, and lots of new friends. Thanks Chef Amy and Chef Mel for the best afternoon of our week in New Orleans. See you next year!"
"Had an amazing time! Great food, Wonderful people and excellent experience!
I've never been to a cooking class but would recommend to anyone. The chefs were so easy to talk to and I felt like I could duplicate the amazing meal we prepared!"